Charleston is a literary and artistic Ali Baba’s cave. If you go to the Small Wonder short story festival there, it’s worth going early and taking a tour of the house. Virginia Wolfe lived there for a while with her sister Vanessa, before filling her pockets with stones and wading into the river Ouze. The rooms of the house are covered in paintings, fragile murals, decorations – every inch had to be beautiful. There’s a sculpture of the head of a boy, a gift from Renoir, as well as many rare and wonderful paintings. The tales of tortuous relationships would put any fiction to shame. I’m reading more about it in “Deceived by Kindness” by Angelica Garnett, which I picked up in the shop there on the recommendation of one of the marvelously enthusiastic and knowledgeable tour guides. The house is restored and preserved by the Charleston Trust. T. S. Eliot read from his manuscript of The Waste Land for the first time ever in the sitting room there, and somebody fell asleep during the reading. Another speaker said that somebody had fallen asleep while Maynard Keynes read something, which sounds slightly more plausible. Whatever. There are lots of funny and amazing stories like that, and a lot of sad stories too about the place. I spent a sunny morning in the walled garden, working on a short story, on a bench with nobody else around, just fruit trees, flowers, bees, and statues. A party of schoolchildren passed through later.

I started making notes about the view on the 9:25 p.m. (Tuesday) train from Cardiff to London, Paddington. I sat facing in the direction the train was going.

A wig of cloud on the mountain head
A cloud embryo in the belly of the horizon
A goldscape cave and coral clawscrape
Shockhaired fogey in a tunneled blackout
[illegible] of [?] striplight switchback [?] [illegible]

Then we were diverted after some station, and the train sped backwards the way it came, and I saw the same things again. Weird.

I’d worked late after Sunday midnight, caught the 7:45 a.m. train from Paddington to Cardiff on Monday morning, and worked continuously on software at a new customer site and afterwards in a hotel through till dawn on Tuesday, then skipped breakfast and back on-site again from 8 a.m. till 9:10 p.m. jumping into a taxi that had been waiting since 9:05 p.m. and pell-mell back to Cardiff Central station.

I’m telling you this to give you some idea how I felt on the train. I’d had to skip breakfast though I nipped out for a sandwich and Starbucks soy-latte. Thanks to Great Western and a charming young lady in the buffet car, my dinner on the train was a heated ciabatta mushroom omelette sandwich, and two cold tins of Stella Artois. The effect on me was something like a tranquiliser dart meant for a hippo.

The last line instead of being horizontal veers upwards back over the previous lines. I’d conked out mid-sentence. I’ve no idea what the last two lines are supposed to mean.

I got into London after midnight and shambled onto the last Central Line train to Baker Street, where there were still trains running on the Jubilee line to Willesden Green. I was stocious. 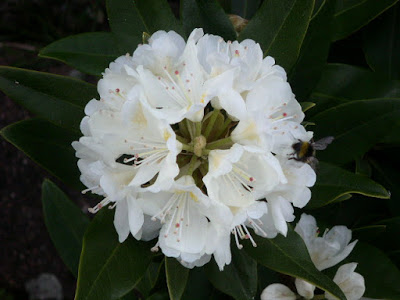 And I wish I could show you the robin singing on my shoulder.

Has maddened every mother’s son 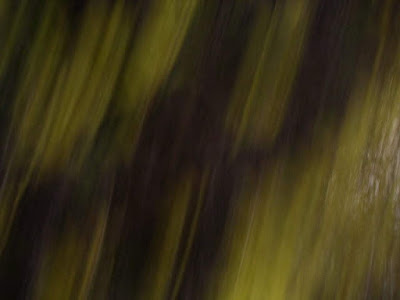 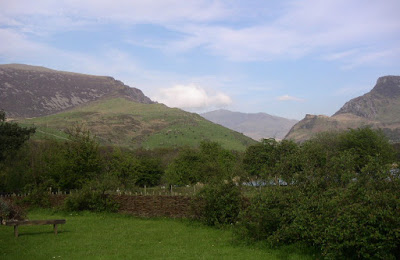 Just back from a writers weekend there. A most remarkably beautiful place and a very, very pleasant vegetarian experience amid fields of sheep and sportive lambs. A Welsh heaven altogether. I could happily spend my whole life there, if only I had the wherewithal. Luckily it’s not for sale, it’s there for the poets and their gambolling iambs. Poets from Ireland and Wales are creating a bridge made of words between Eire and Cymru. I don’t know why I’m blessed with totally undeserved joys such as last night’s readings in the new Galeri at Caernarfon by the inspirational Gwyn Parry, who had some Welsh poems and some in English, the formidable Eabhan O’Shuilleabhan a stern and sharp writer, heartwarming Nessa O’Mahony’s amazing captured ghosts, and top of the bill a marvellous Irish poet Jean O’Brien. I couldn’t understand a word of Ifor Ap Glyn, being a complete ignoramus where Welsh is concerned (which I would like to change) though to be fair he handed out translations of his pieces, which I haven’t read yet.

I wish I could show you more of the pictures I took, but I’m a little baaaashful.

It was the first writers’ weekend organised by a certain group of poets who live around the Nantlle valley. Organisationally it needed a bit of clairvoyance to know what was happening, and what else would you expect from something “organised by poets”! (Imagine a smiley face here.) But those were just little teething troubles with the event. I was one of two people from London, the rest were mostly from Ireland, having bought a package including the ferry to Holyhead. We were fed vegetarian fare throughout and soya milk and fancy teas and all that, very nice sweets too. The location is a Welsh garden of Eden, in short. Beside a lake, with the clouds putting on a show over the surrounding mountains every morning, and Snowdon appearing at the end of the valley sometimes. It’s also slate world, more slate than it’s easy to imagine. We had workshops with local poet Gwyn Parry and also with Jean O’Brien. Poets Nessa O’Mahony and Eabhan Ni Shuilleabhan with connections to the centre were also on hand. I got a copy of Nessa’s second book, “Trapping a Ghost”. Jean is a well-known and distinguished poet in Ireland. I was able to grab a copy of her third collection, “Dangerous Dresses”. I had to be quick. People were buying copies not singly but in threes and fours.

Pieris “Forest Flame” is just past its best now, starting to go to seed already (if I look closely). I’ve been meaning to try and snap it. This is one of three in my front garden that came from Inverary about ten years ago. The others are a bit bigger than this one, but harder to photograph. Forest Flame is a beautiful evergreen and apart from the profusion of pendulous white flowers, new foliage emerges bright red – hence the name.

Went to the barbers this afternoon, braving scarification by a mad Kosovan whose traditional haircare seems to involve repeated blows to the scalp with the prongs of a steel comb. He wasn’t there today, thank Allah, and instead there was a very nice, strapping lass in his place.

You never know what you’re going to get when you go into a barbershop in London. The last place I tried had a soundtrack of dreary chanting by an Arabic male voice choir, and a constant stream of fit young Arab blokes passing through – “Salam Aleichem” “Aleichem Salam” – chatter, chatter, and away again. They slapped hair oil on my hair without asking and I came out looking like Lon Chaney (senior).

Down on the High Street, I am struck by the beauty of water standing by the kerb, and the bright glow around the edges of dark clouds at the end of the high street. It ought to be enough to live these things, and not have to tell the world, but there is some urge to share, to tell people and have them say, I know – and did you see? So much waste…

Or profusion, I suppose. These wallflowers are growing wild in the front garden too, with some other purple flower underneath (violets?) 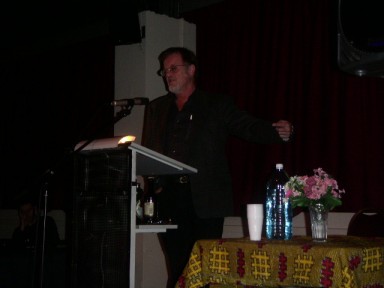 The bestselling author gave us the lowdown on how to succeed in writing. Just take a template and change the names in it, and Bob’s your uncle. I think I wrung a few nervous laughs out of the audience with my portrayal reading of Cloco the Clown. 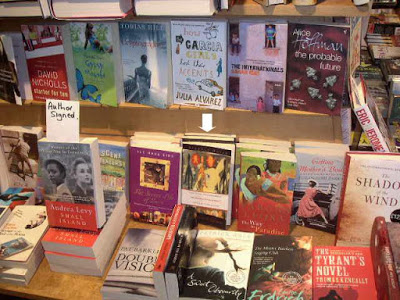 If you’re in northwest London, don’t waste your money on Amazon delivery charges. Just pop in to the Willesden Bookshop, Kilburn Books or Queens Park Books and get yourself a copy of The London Silence while there are still a few in stock. Alternatively, I’m sure your local bookshop would be happy to order it for you.

Here is Terri Carrion, rightly described as “a brilliant, ironic and soulful poet from Miami” reading at the DeadDrunkDublin Festival.

That’s the only photo I got. I was too busy with the Guinness and lounging. Oh yes, and scandalising the bourgeoisie with my stories.

Willesden Herald - Story of the Month

Unless otherwise stated, all text and images are copyright (c) Stephen Moran 2021. Not to be copied or republished in whole or in part in any medium without prior permission. As is customary, short snippets may be quoted without permission as long as they credit the original here or include a link that serves as a credit to the original here.

Beverly Parayno
There Must Be More To Life

than having it all.

The Best of New Literature and Art

Reader's Guide to West Edinburgh. Deals with writing and writers of all kinds connected with this part of the city. Local history.

Your Man For Fun In Rapidan

poems for a more hopeful world

Memoirs of a Madwoman

Writer of fictions and non-fictions

Airplane in the Sitting Room

Travails of a Mother of Five

Fiction writer from Cape Town, currently in Norwich. News and information about my books.

Poetry for Finding Meaning in the Madness

a to z of the writer of the a to z

Submit your Television Pilot or Spec Screenplay for Full Feedback. Plus get it performed by professional actors at festival.

the easiest way to discover your next favorite blog

Daily summary of the life/movie world.

Getting excited about short stories in the UK & Ireland - in print, online & live!!

This trolleybus is going East
The Green Press
Angela Sherlock